Composting With Coffee Grounds – Good For Plants or Just a Fad?

Making use of coffee grounds in the garden is a great idea because it turns an otherwise wasted product into something very useful indeed.

Here’s how you can make use of coffee grounds in the garden.

What Are Coffee Grounds? 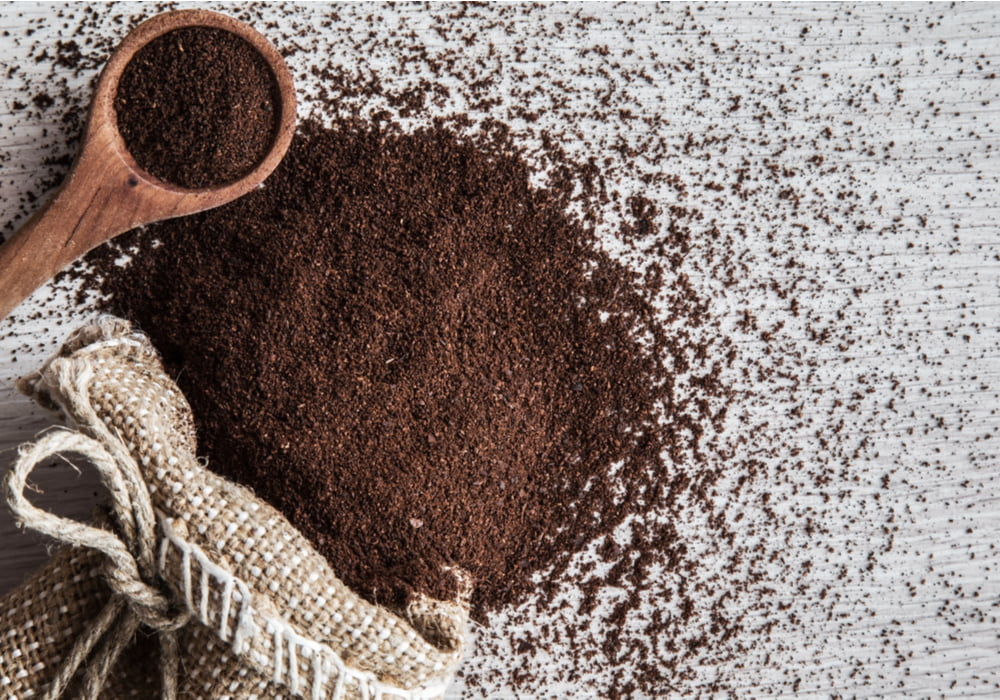 If you have a coffee machine at home you’ll be familiar with coffee grounds but maybe you’ve spotted your local café offering free grounds and wondered what it’s all about?

Grounds are an organic material that breaks down into compost. Instead of sending coffee grounds to landfill we can re-use them in our outside spaces.

How Do Coffee Grounds Help The Garden?

There are several ways leftover coffee grounds can be used in the garden and we’ll go into a bit more depth later on, but in short they make a great mulch, fertilise your compost heap, create nitrogen, may scare off slugs and cats, and some say they can make your soil more acidic.

Where Can I Get Some?

If you don’t own a coffee maker then most high street or supermarket cafés will have bags of leftover coffee grounds. If they aren’t already bagging them up for customers just ask. In most cases, they’re happy to get rid of the waste. 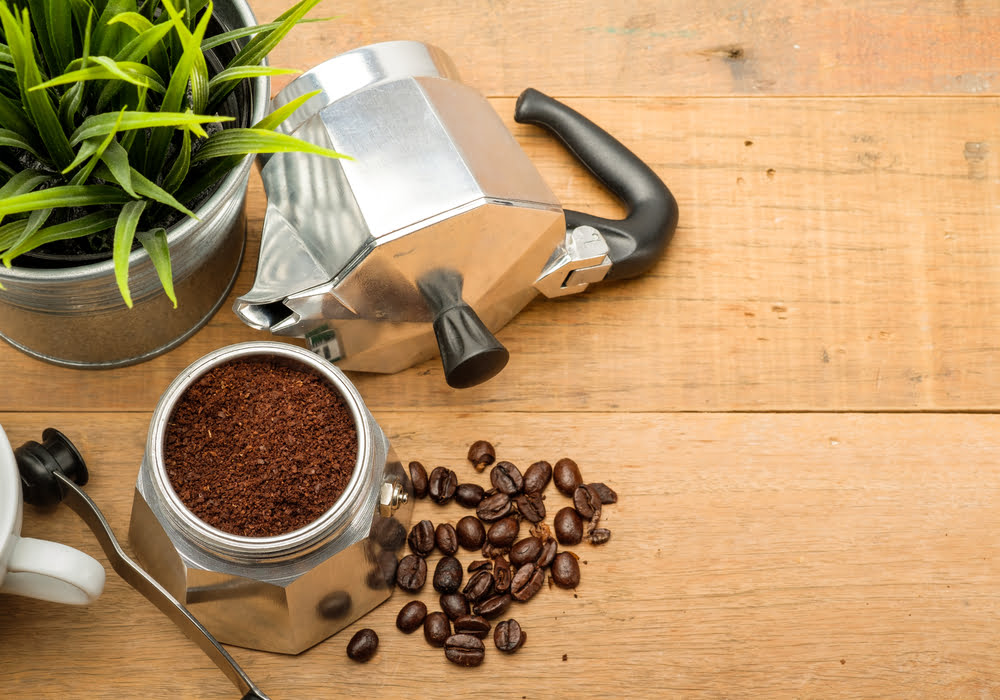 How To Use Coffee Grounds

Coffee is a natural material that breaks down into organic matter. This is good news for soil as it improves water retention, aeration, and drainage.

Crumbly soil means your plant roots can easily spread out to create a stable base, suck up more nutrients, and absorb more air. This leads to bigger, better, healthier plants.

How To Improve Your Soil Using Coffee Grounds

Sprinkle used coffee grounds thinly across your border and dig them in a few inches. They will eventually break down to improve the soil and attract important earthworms. Earthworms reach up to pull coffee grounds down into the depths just as they do with fallen leaves. 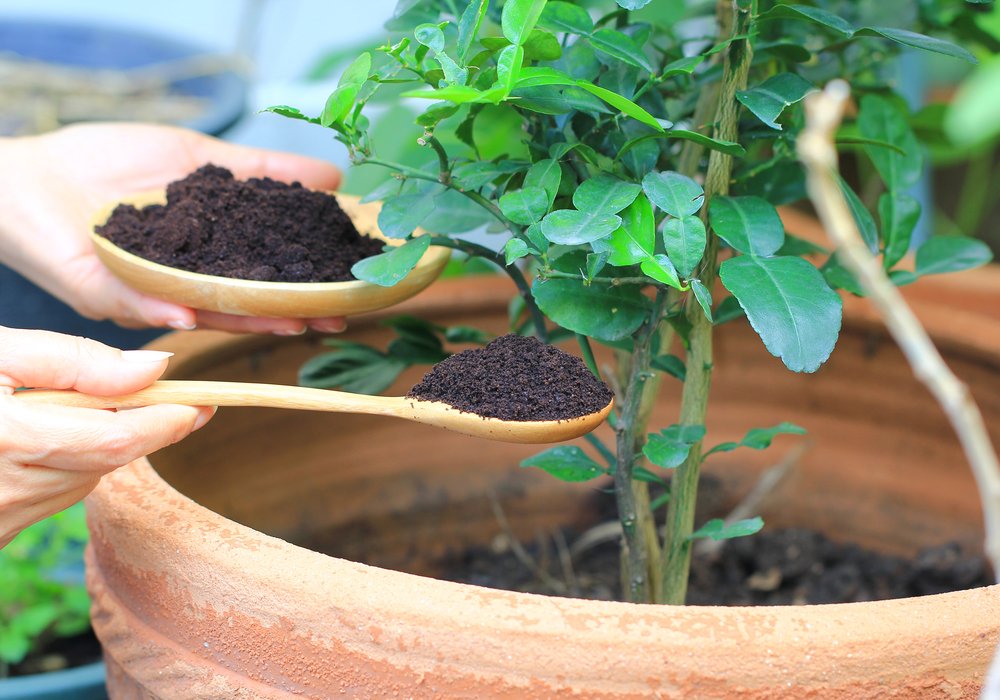 Coffee grounds and used coffee filters can be composted and they’re a great addition to a compost heap.

As coffee grounds rot they release their nutrients and create a fabulous compost you can use all around the garden.

How to Compost Coffee Grounds

Coffee grounds look brown but for the purpose of composting you should treat them as green waste.

Green waste is the nitrogen-rich, leafy, fleshy leftovers whereas carbon-rich brown waste is dry such as old leaves, cardboard, and straw.

You should aim for 25-50% green waste for a healthy compost heap. Remember to turn it regularly to let air in. If it smells or becomes slimy you need more dry brown waste.

Mulches are excellent for the garden. If you have a sun-baked garden, a chalky one, a weedy one – basically any kind of garden with flowers, veg, shrubs, or trees then mulch is your friend.

Mulch is beneficial in several ways. It blocks out light so weeds die off, it also forms a layer that blocks out the sun to keep moisture around roots. Mulch also protects your soil by preventing rain splash and wind stripping the topsoil away. 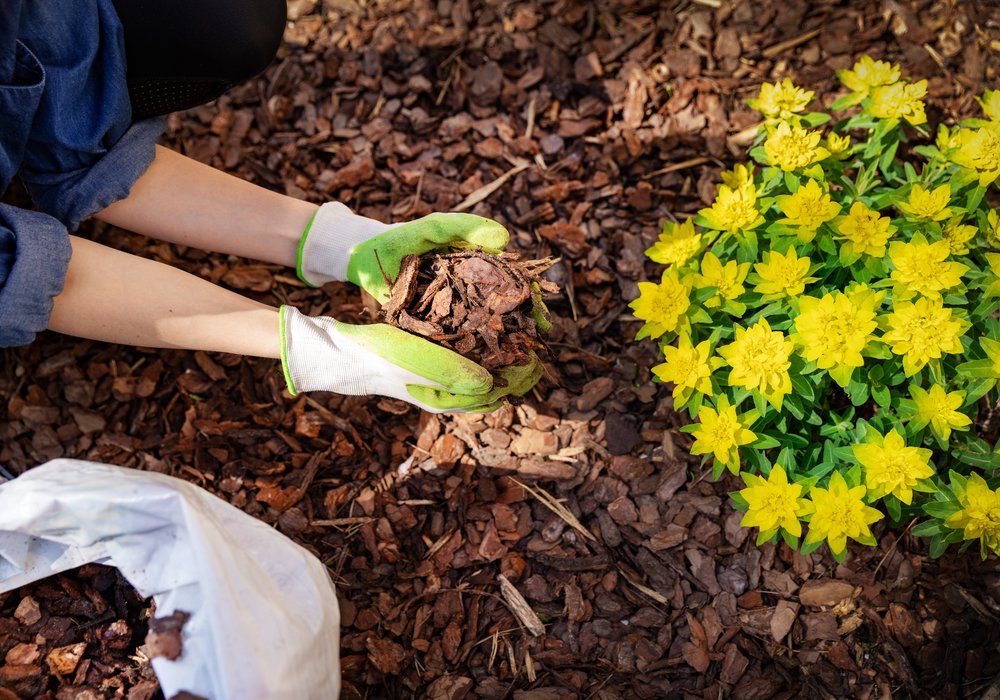 Mulch can be anything from compost to rubber shreds, straw, manure, and stones. Some of these are expensive and when you need to replace them every year it gets pricey – but when we add coffee grounds to the list you get lots of free mulch!

How To Use Coffee Grounds As Mulch

Coffee grounds form a blanket that seals in moisture and suppresses weeds. Spread them around the base of your plants for best effect – but a word of warning.

Some gardeners find that coffee grounds are so fine they compact and form a solid barrier. Solid mulch isn’t good as it locks out rain and air. 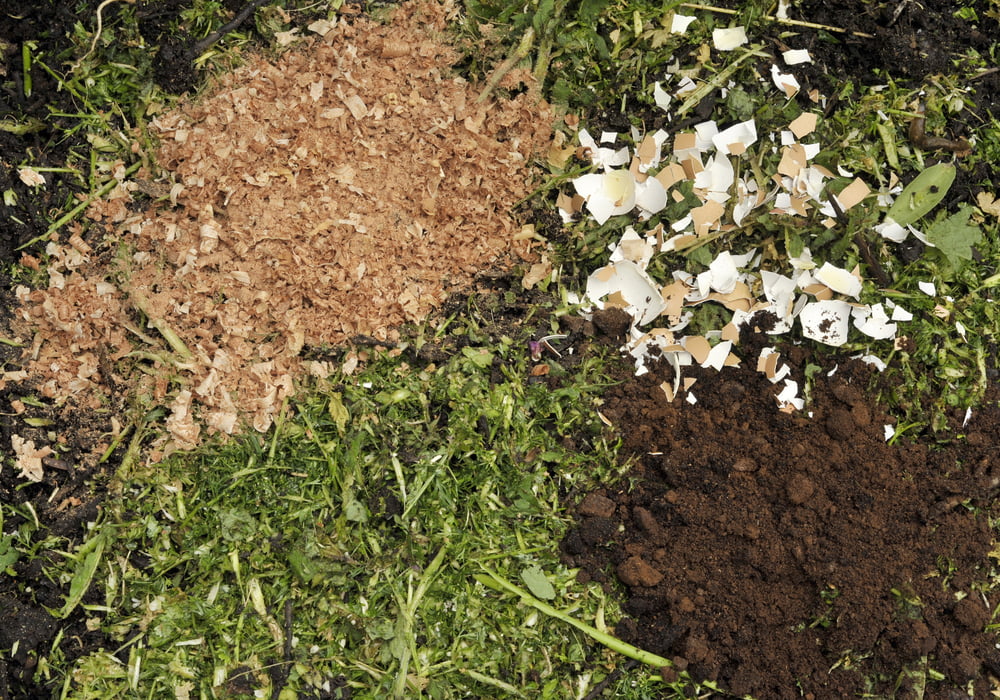 It’s best to mix your coffee grounds with another mulch such as compost. This makes your expensive compost go further and prevents any compacting.

Cats can be a real pain in the garden digging up seeds and using your borders as their toilet. There are plenty of cat deterrents on the market from lion poo to sonic devices but some gardeners say that cats also dislike the scent and texture of coffee grounds. Anecdotal evidence suggests cats don’t like the fine sticky texture on their paws and the coffee scent is too strong for their sensitive noses.

How To Use Coffee Grounds As A Cat Deterrent

Sprinkle coffee grounds around your precious plants and areas you know a cat regularly visits.

It might not work, but coffee grounds are free and good for the soil so why not give it a shot. It’s best to replace them regularly to boost the scent and texture.

Remember that coffee grounds can compact so remove the first pile before adding more.

Another potential hater of coffee grounds is the garden snail.

There’s anecdotal evidence that the No.1 garden enemy doesn’t like the texture of coffee grounds. Much like wool deterrents that cost so much in garden centres their soft bodies just don’t like its abrasive texture. 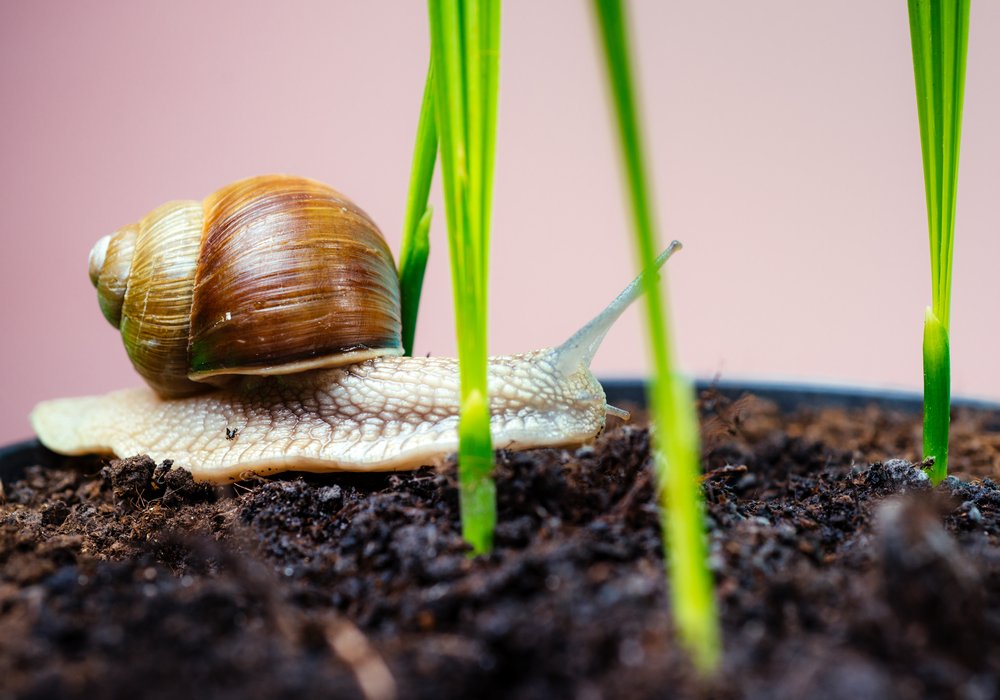 Some people suggest it’s the caffeine content snails don’t like. Either way, it’s not scientifically proven but why not try? It won’t cost you anything and it might be a great nature-friendly slug and snail deterrent.

How To Use Coffee Grounds As A Snail Deterrent

Sprinkle used grounds around container edges and alongside bedding or veggies.

Just remember to replace it regularly – don’t top it up and cause compaction issues.

Slugs and snails may not like coffee grounds but composting worms just love them.

Earthworms head up from the soil for coffee grounds and if you have a wormery you’ll see they can’t wait to eat them too. Worm farmers say their worms will leave other scraps and head straight for the coffee grounds first.

Turns out worms need coffee too and I can’t blame them!

Used coffee grounds also help to keep the environment damp which is good news if yours tends to dry out in sunny or windy conditions.

How To Add Coffee Grounds To A Wormery

Pop small quantities in the food section and watch them eat it up – they love it. Your paper filter can go in there too.

Don’t pile all your coffee grounds in the wormery every day though, because some worm farmers think it can turn the environment a little acidic and worms don’t like that. 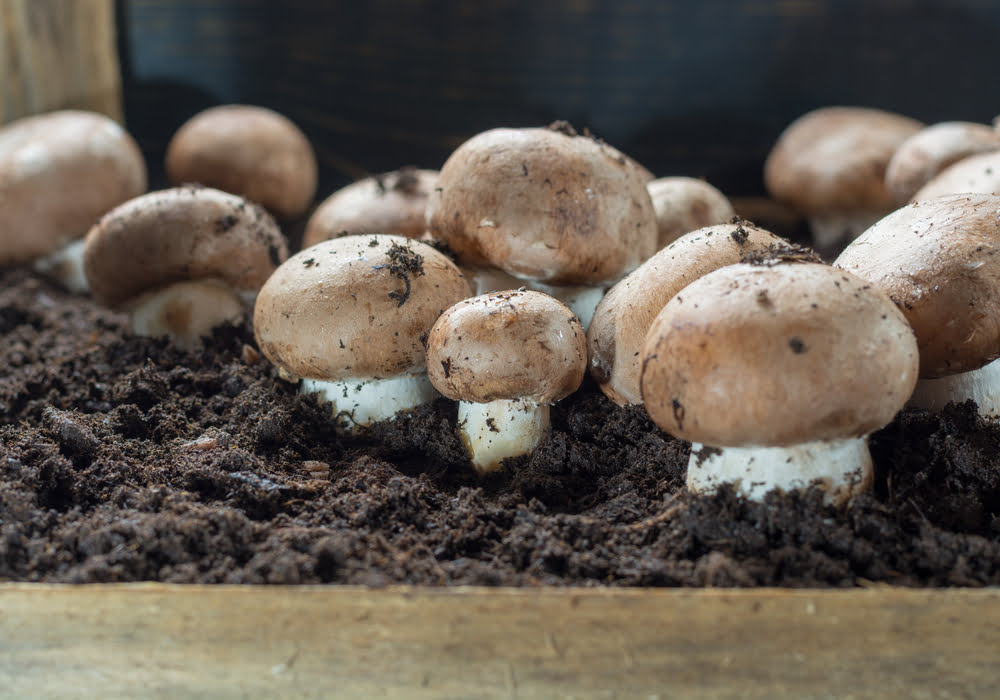 Coffee grounds as a substrate for mushrooms?

How To Grow Mushrooms In Coffee Grounds

Oyster mushrooms are the easiest to grow. You’ll need to order some spawn online and find a large freezer bag or an old ice-cream tub. Clean the bag or tub several times and cut four 5mm holes in the sides.

Mix the spawn with your coffee grounds and close it up so there’s no light (leave some clear areas for the holes to breathe) and pop it somewhere warm such as the airing cupboard, a summertime shed, or a spare room cupboard.

Once the spawn has spread, pop it on a shady windowsill and make another larger hole so you can spray the coffee grounds with water. Mushrooms won’t grow if the mixture is dry.

A week should be enough time to see little mushrooms which will then grow to full size within another week. 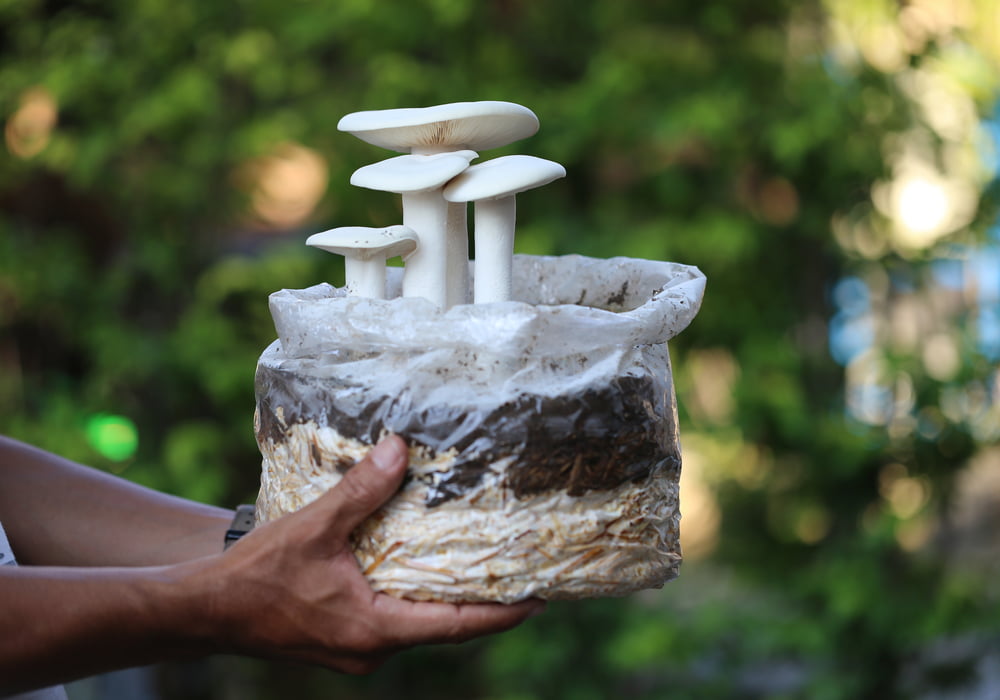 Tip: If the bag contains any green patches stop and try again. This is a competing mould that will contaminate the whole crop.

There’s a suggestion that used coffee grounds can boost the acidity level of soil and improve growing conditions for acid-loving plants.

It’ll take a long time to boost the soil with unwashed coffee grounds, but if you’re determined then go ahead.

How To Use Fresh Coffee Grounds To Boost Acidity

Sprinkle fresh unused coffee grounds around lime-hating plants such as: 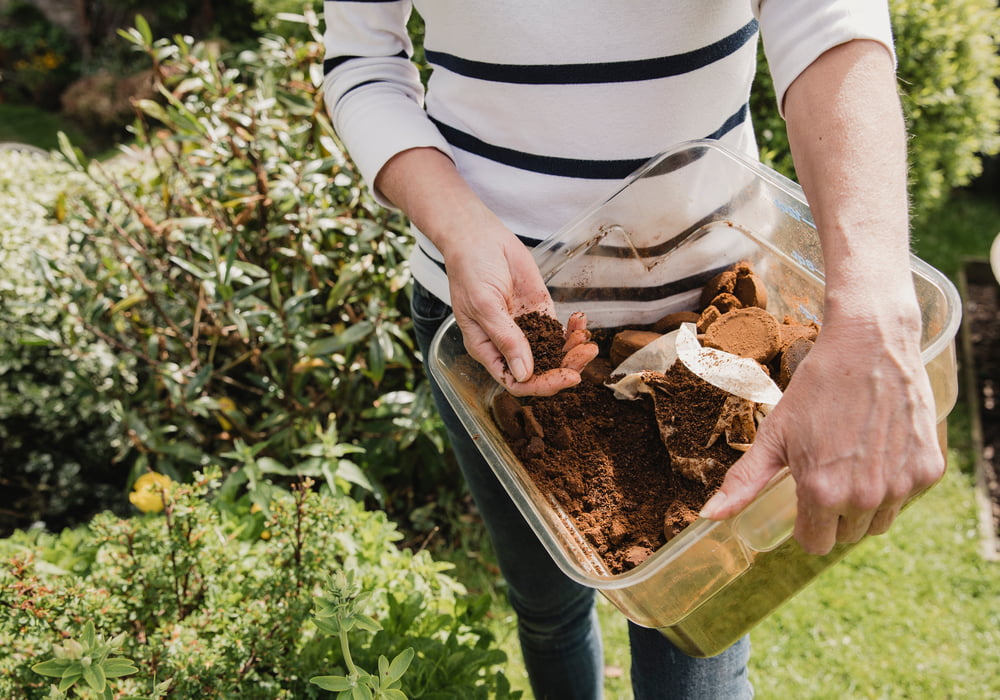 And why not give some to veggie crops that enjoy a moderately acid soil? These include:

As the coffee grounds rot down they release nitrogen and acid into the soil to boost your plants and keep them healthy.

Used Coffee Grounds Boost the Environment At No Cost 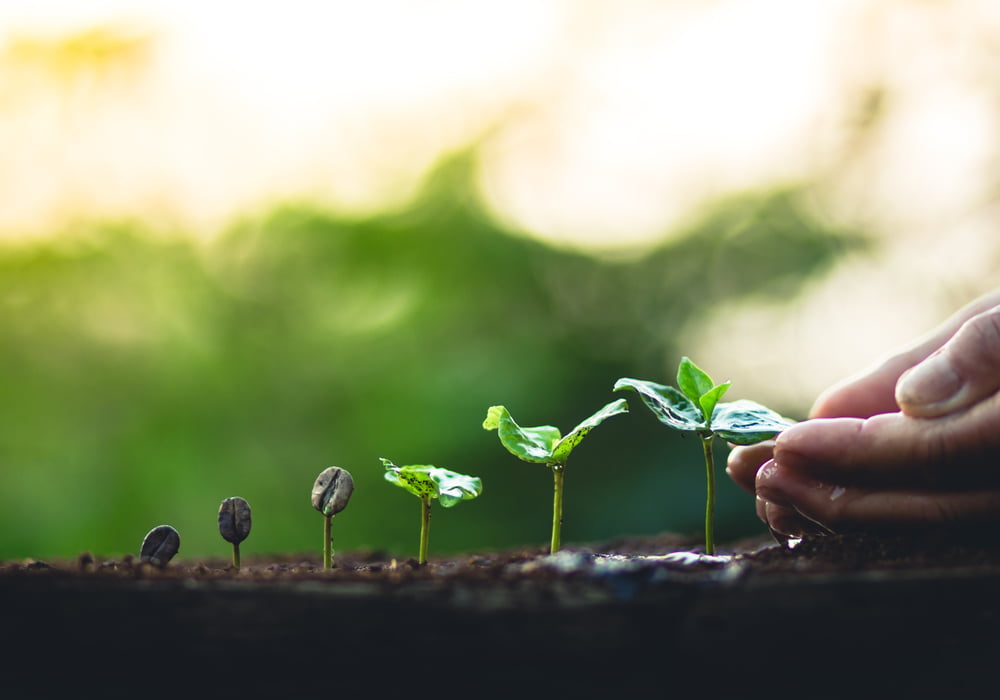 All plant matter can be composted. Sending coffee grounds to landfill is a crying shame when it’s so useful!

Next time you spot a café giving away coffee grounds, grab some. They’re a great free resource to use in your garden and have plenty of benefits for no outlay. It’s not often you can say that!